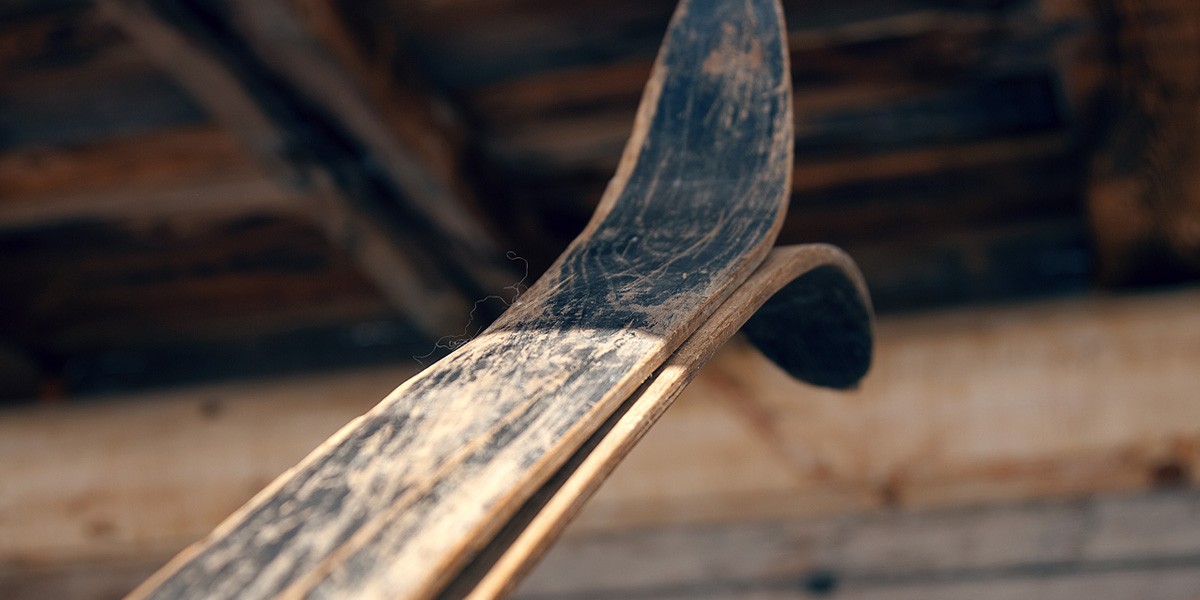 Bartl Gensbichler, who is actually called Barthlmae, is, in accordance with Pinzgau traditions, referred to as "Da Bascht". He has always been a real mountain child.

It was a simpler time back then...

Even when he was a little "Biawei"* (all words marked with a * will be explained at the end of the article) on the "Perfeldhof" farm in the shadow of the "Zwölferkogel", life seemed so simple. There were a lot of kids in the area at that time. And there was a "Leitn"* behind the house too. "We slid down that when we were as young as three of four years", Da Bascht recalls. The skis were no more than "Hoizbrettln"* back then. Granted, they did have edges screwed to the surface and had strap bindings on the top. What did the surface look like? "It was red lacquer. When it was 'abgeplattelt'*, we simply re-painted the surface", Bartl says. As we said, life was simple back then. High, rigid ski boots, functional underwear, breathable ski jackets with iPhone pockets - all that didn't exist yet. But what they did have is a lot of fun and lot of appetite for risk. They were willing to "herumzuwüdern"* in unknown terrain. No slope was too steep, no "Schneeridl"* was too high. "When we were really small, my grandmother used to carry us up the slope", Bartl remembers. That was considered a luxury. She was a personal one-seater chairlift, so to speak. However, the grandmother was very strict when Bartl and his cousins got too curious and slid down the "Leitn"* too far. Every attempt of that nature was met with a hearty "Watschn"*. But a real "Wüdera"* doesn't "suda"*. It didn't take long until the "Gschroppn"* wandered down to the valley station of the "Zwölferkogelbahn". The next punishment seemed imminent. The fact that his mother was at the till of the lift certainly didn't help their ambitions. But, against all odd, they prevailed. The small "Pimpf"* managed to clamber into the lift and were whisked off to the summit. Once again, punishment seemed imminent. The summit station was, after all, the workplace of his uncle, where he was a "Liftler"*.

This childhood sounds like straight from a homeland novel. He simply "fetzt"* his satchel into the corner every day and headed straight for the slopes. "Hannes Margreiter, our headmaster, was the first to hone our skills. Skiing was a really big deal in those days", says Gensbichler, who now passes on his knowledge to younger skiers as the president of the Salzburg Ski Federation. His own talent was soon spotted and nurtured. Heri Wolf, the head of the local skiing school, supplied "Stangln"*, while Franz Feiersinger and Hans Hinterholzer, his first coaches, got him onto the race track. Hansi Enn was at his side even then. Hansi is two years younger than Bartl, but the little tyke was also a huge talent. Most importantly, Hansi was a "wüda Hund"*, just like Da Bascht. "You had to be a huge talent back then. Just consider the state of the slopes we faced. If you had a high starting number, you almost sank into the 'Wandln'*, which sometimes reached all the way up to the 'Ohrwaschln'*. Especially when the snow was particularly 'batzig'*", Bartl recalls. He started in his first race in the first pupil category in Neukirchen when he was nine years old. He started last, but came second. Bartl has always been a wild one. He was soon promoted to the provincial ski team and won the Austrian downhill youth championship at the tender age of 15. He added the European downhill championship in 1974. He also came second in the Giant Slalom, a mere nine hundredths of a second slower than a certain Ingemar Stenmark, who is the same age as Da Bascht. The latter says that this result still stings a little, especially as the legendary Swedish rival started his career in the World Cup a few days later. The silent Swede went on to win 86 World Cup races. Bartl would have loved to have beat him once. However, Bartl was to be hampered by persistent injury problems. He kept on fighting his way back and was rewarded with a World Cup victory in the downhill race in Heavenly Valley in 1977. Back then, his coach was Charly Kahr, the man who brought Bartl into the speed races. When Da Bascht set his sights on the Olympic Games, he was thrown off track yet again. This time, his knee gave way. Not even the best "Soim"* could help. "That race would have been perfect for me. The track was technically demanding and fast", Gensbichler muses today. Instead of winning the golden laurels, he had to end his career.

He moved on swiftly. Da Bascht took over a skiing school and founded the legendary skiing instructor band, which has travelled as far as China. He has now been the head of the Salzburg Ski Federation for four years and is always on the lookout for new talents in the mountains of Salzburg. He has been tracking the career of one skier in particular, especially as he is from the same valley. This skier, named Georg Streitberger, is just as wild as Bartl used to be and also won the European youth championship. "Georg was a great skier right from the start, but he was as unlucky in terms of injuries as I was. But he is a 'Stehaufmanderl'*. I wish things would work out for him just once", Bartl says about his successor. "The two exceptional speed races hosted by Saalbach last February were merely the start. Saalbach has, as a representative of Austria, applied for the FIS Alpine Ski World Championship 2012 or 2023", the president reveals. He is already excited at the prospect of the best skiers in the world - all as wild as he used to be - meeting in his home valley.

"Wüdera": poacher; someone who hunts without hunting license in the estates of others; colloquial for someone who doesn't accept limits
"Biawei": small boy
"Leitn": hill, slope, steep meadow
"Hoizbrettln": wood boards; synonym for the first ski prototypes
"abgeplattelt": when the coating detaches from the surfaces
"Schneeridl": mound of snow
"Watschn": slap
"sudan": moaning, whining
"Gschroppn": rather loveless term for children
"Pimpf": small children
"Liftler": employee of the ski lift operators
"gfetzt": in this case it means thrown
"Stangln": slalom posts for races
"Wandln": troughs that develop next to slalom posts
"Ohrwaschln": ears
"batzig": sticky
"Soim": balm
"Stehaufmanderl": a person who bounces back quickly