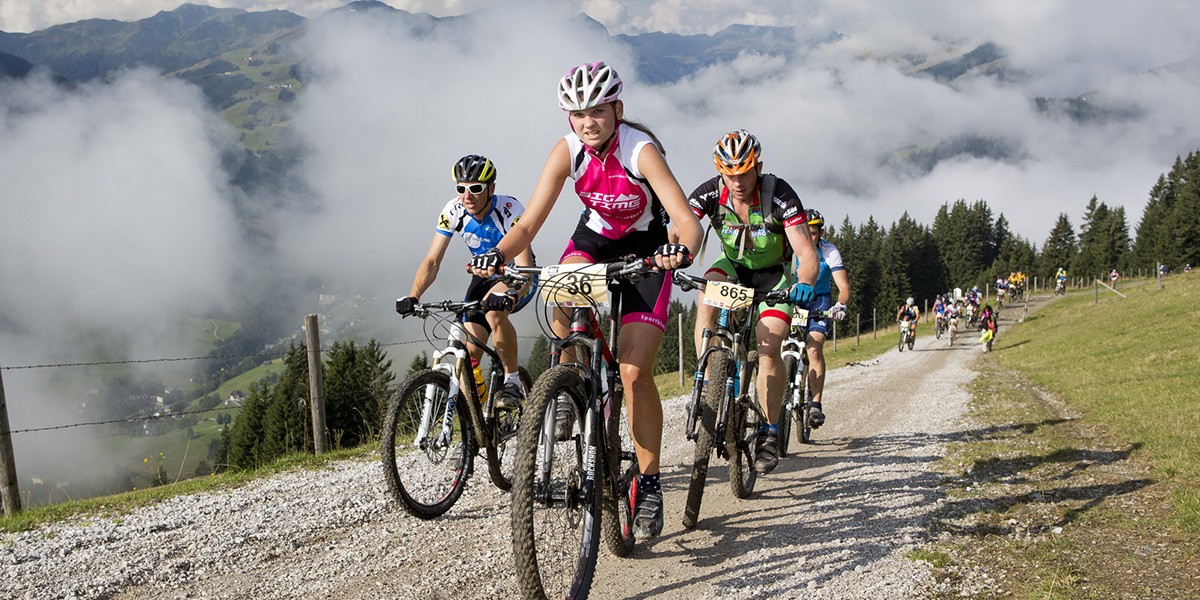 The quiet hum of the bike chains, the rhythmic breathing as a collective...

...is only interrupted by a hectic shouts from by-standers as the bikers ascend to lofty hights.

The World Games of Mountain Biking are in Saalbach Hinterglemm, the bike arena of the Austrian Alps, for the 17th time. In 1999, the first world championship for amateur bikers was born out of the idea to promote the mountain bike sport in the Glemmtal.

The mega-event became popular very quickly. Today, it is organised professionally and lures athletes from all over the globe to the world-famous ski resort in Saalbach Hinterglemm.
16 years later, bikers are once again invited to test their limits - and compete with friends - between the 10th and 13th of September 2015. Join the downhill, cross-country, or the legendary marathon - it's your choice!

The athletes are greeted with free training opportunities in all disciplines and rousing welcome party in a marquee on Thursday.
However, many athletes will face their first competition as soon as Friday. The cross-country race starts at 2pm. The 2,200m circuit follows a highly selective route. It's man against man and woman against woman in a brutal fight for the best positions. The tricky sections of the single trails of this route require great command of the respective bikes and - on occasion - a bit of luck.
On Friday evening, the 17th World Games are officially opened with the parade of nations. This festive and world championship-worthy event is always a real highlight for athletes and fans alike.

Another highlight of the event follows on Saturday; the legendary marathon starts at 9am. This is for the bikers with some serious stamina.

In order to allow every marathon biker to choose a suitable distance, the athletes are presented with four options. The "Marathon 80", which covers more than 80km, is considered to be the most prestigious. The participants need to span no less than 3,678m of altitude difference, which tests the limits of many.
The "Marathon 58" is not exactly easier. As the name suggests, bikers need to ride for more than 58km and bridge an altitude difference of 2,920m within the region's bike arena. Tough uphills, epic single trails, and rapid downhill sections - this is spectacular!
The other two options are "Marathon 42" and "Marathon 31". The latter is obviously the shortest of the four bike marathons. Every endurance junkie can find a race to suit his or her personal needs.

The final competition of the gravity enthusiasts takes place on Saturday afternoon on the original downhill route. The "Pro-Line" on the "Reiterkogel" is a highly selective and fast race trail. Athletes on "Big Bikes" hurtle down the mountain in full-face helmets in a battle for tenths of a second. The most tricky corners separate the men from the boys (and the women from the girls). This is where the best downhill racers define their positions.

This is definitely one of the coolest event highlights in the summer!

The eva,VILLAGE actively contributes to the event and even has its own eva,TEAM in the marathon. Would you like to join in? Simply register and you receive a starter kit with a jersey for only € 32. Register via e-mail by writing to info@eva-paradise.at or by phone by calling +4365416262.