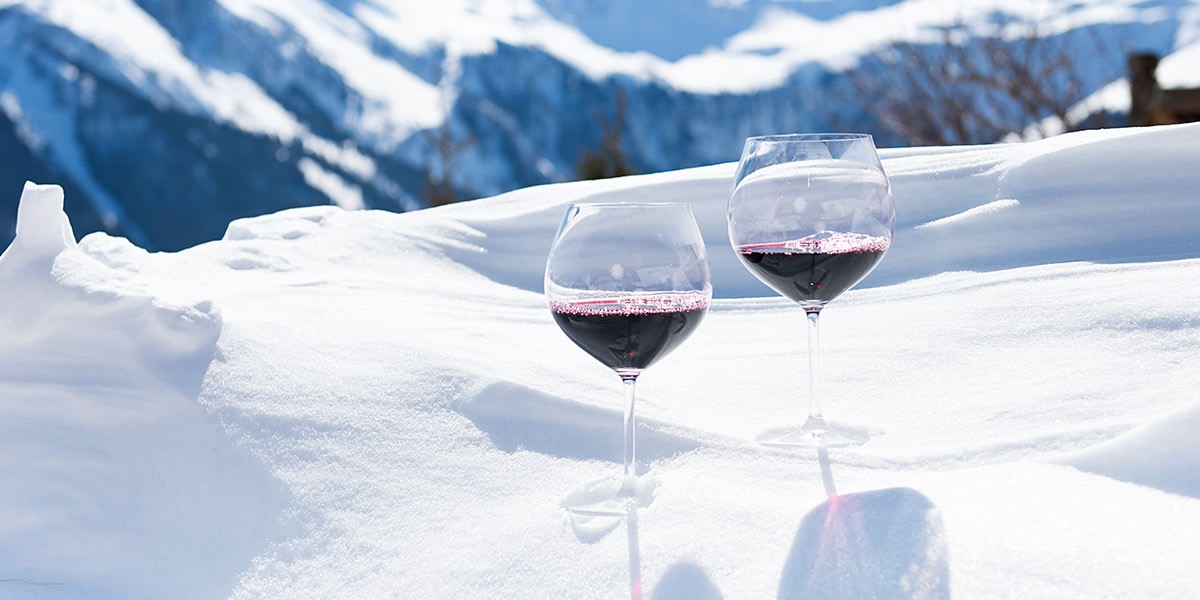 Fine wine, tasty delicacies, warm sunshine, and a relaxed atmosphere - the eva,SKI+WINE days were, once again, a feast for the senses in the paradise that is Saalbach Hinterglemm.

Austria’s top vintners came together in the 4-star superior hotel eva,VILLAGE in Saalbach Hinterglemm over the last few days and gave the participants of the SKI+WINE days insights into the mysterious world of wine.

Following the official welcome on Thursday night, Austrian top vintner Toni Hartl and Moni, his wife, introduced themselves to the inquisitive and thirsty guests. In a relaxed setting, Toni and Moni explained the basics in terms of perfect wine, the secrets of growing vines, and how one turns ripe grapes into fine wines.

The following day, the group invaded the slopes of the Saalbach Hinterglemm Leogang ski arena after a hearty breakfast - after all, the slopes were still in excellent winter condition. Only the increasing power of the sun suggested a hint of spring in the mountains.
Daniela and her team showed the wine connoisseurs the uniqueness of the ski resort. From the base in Saalbach, the joyful group embarked on an expedition to Leogang. When the participants returned to the Glemmtal, the rustic Panorama Alm welcomed them with a so-called “Schmarrn” in a “shared pan”. Here, they also tasted the first drops of wine, quasi as an appetiser.

After a short stint of aprés ski, the group headed straight back to the eva,VILLAGE - a rosé wine from the Johann HEINRICH vineyard, as well as a fine Verjus by Manfred Tement, welcomed the mountaineers.
Vernal dining was on the agenda of the evening. Culinary highlights from the kitchen and an exciting wine selection enchanted the participants of the “dine & wine” session. Stefan, the son of Manfred Tement, took advantage of the occasion to introduce himself to the guests. After Stefan explained the secrets behind the Tement wines, Christian, in his capacity as the representative of the Johann HEINRICH vineyard, willingly revealed the philosophy of his tradition-steeped company.
The evening was capped off by funny anecdotes about experiences on the slopes while enjoying some drinks in the hotel bar.

Prosecco group vs sporty troupe? This was basically the choice presented to the SKI+WINE participants on Saturday. While the Prosecco drinkers reduced their time on the slopes a little, the sporty guests opted for powerful carving turns to work up an appetite for their lunch break.

The two sport ideologies finally clashed on the “Maisalm”. However, the guests were soon back on the same page, especially after a highly successful blind tasting. The group easily managed to distinguish between red and white wines, but the difficulty level rose when the participants were tasked to define vintages and grape varieties. The following wine quiz was supposed to determine the most accomplished wine connoisseur, but the nature of the group dynamics led to no less than 5 winners being declared.

The evening “Kasnockn Party” at eva,ALM was defined by comfort and exuberant celebrations. The musical entertainment was supplied by the “Second Hand Brothers”, but the sound itself was not second hand at all.

The musicians got the crowd going in no time and created an excellent atmosphere. During the concert, the guests could watch a huge pan of “Kasnockn” being prepared on the terrace. There were even flambé pancakes as dessert.

But let’s turn our attention back to the wine quiz. The 5 equal results led to a tiebreak. After all, it’s always important to determine the real winner.

The Sunday was the day for saying your goodbyes and promising to meet again. The great event in the eva,VILLAGE ended on a very relaxed note, but - luckily - there’s always the joy of looking forward to the next one.